May in the garden

Sorry I have not written earlier but May is a busy time with seed sowing, potting on, potting out, grass cutting, weeding and numerous other jobs. Just to keep us on top of things we are opening the garden for The National Garden Scheme (NGS) first week of June so lots to do by then.

The Scottish thistle is very prickly and can get very tall but a wonderful addition to the garden. Beware of letting it spread the seeds or you will have a very prickly forest! I try to keep only a couple for the next year. Once it flowers the plant dies, but does need a suit of armour to cut it down!!

Another not prickly but just as wonderful, and in flower now is the angelica, seeds all over if you are not careful but I weed out all but a few of the seedlings and keep them for the following year, a biennial, so the plant dies after flowering but seedlings that grow this year may flower next, or the year after.

What about looking good and edible?

The Globe Artichoke is a lovely structural plant and you can eat the fruits. So far this year we have picked 8 of these lovely fruits, a bit fiddly to eat but lovely with roast salmon last night for tea.

If you do not want to eat the fruit leave them on the plant to mature and develop into a wonderful thistle type flower.

I work in software and I suppose always thought I’d never do too much in the garden. Having moved out into the countryside though, the gardening work never seems to be complete! My preference is larger projects in garden; building raised beds; pulling up concrete platforms and my latest project has been laying some hedges from the hazel trees in the garden.

Along the side of our garden we have a ditch, supposedly a natural “spring” runs into it and then out to the road. It’s a bit of a chore each year to clear the leaves and detritus out of it in order to avoid it flooding the garden. However, with the arrival of a little person in the family, I wanted to make the garden safer. We had some picket fencing put in for half of it, but the opportunity for a fun project presented itself. Why not try some traditional hedgelaying?!

As well as making things safer I wanted to achieve something else. You can see from the image above that the hazel trees took up a lot of light. I’d seen a lot of farmers fields around us that had laid hedges and thought I’d have a go. So I did what any elder millennial does when wanting to try something new, I went to YouTube. This one here was really useful. https://youtu.be/iGncS_lojlI. My personal favourite though was this one, pipe in hand and wielding the tools like they’re toothpicks!

I can tell you for certain that my arms were aching for months! That’s even working for just a couple of hours at a time. But there I was, full of enthusiasm and armed with my parents billhook and my pruning saw away I went! It’s important to do the hedgelaying during the winter months so all the new growth is able to “repair” the pleaches. Pleaches are the long cuts you make into the trunks in order to lay them flat.

So after a couple of long sessions my body ached all over. 7 hazel trees and after 4 weeks I had just about beaten it. Hazel, it turns out is a very choice for hedgelaying because it has lots of very straight trunks. So I was able to cut out enough of them to make the vertical stakes and the binding to go across the top. That final bit was quite a fun and easier on the arms!

The final result is below. I took some of the lower branches from the big trees around to help add extra light into the garden. It was a lot harder work and took longer than I expected, but I’m very happy with it.

I’ve also taken some photos over the following few months as the new growth came in. We also now have a nice view of the foal who moved in next door. AND yes, my grass needs some work next! Next winter I’m going to follow it round the corner, but that’s spiky hawthorn.

A plant I have grown to love over the past few years and now it is one of my favourites.

The dark coloured aeonium swartkop is my favourite.

I bought my first one as a cutting from an NGS garden visit. Very easy to propagate and now I have dozens. Just cut off about 8 inches (20cms) leave for the cut to “heal” and then push into a pot of gritty compost. About half of the stem needs to be in the pot.

They have very shallow roots but are very top heavy so I always put grit on top of the compost and use a clay pot where possible for extra weight.

Aeonium need to be in a greenhouse or in the house over winter, mine are fine in a bubble wrapped unheated greenhouse. They go outside from around end of May when all chance of frost has gone.

This year I got a surprise when I went to the greenhouse to see them, one was in flower! I had never seen this before, amazing!. 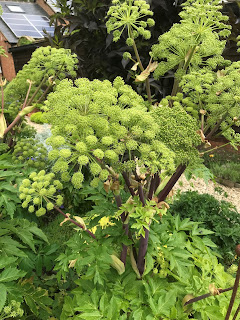