Honeysuckle, a useful plant to climb up a trellis, shed or wall.

The first honeysuckle I had in this garden was an unknown evergreen variety, given to me as a cutting by a friend. Leaving it in a jar of water for a while and it started to grow roots. Then grew in a pot until big enough to plant outside. A robust plant and easy to propagate I now have 3 plants in the garden. You need to keep cutting them back if you want to contain the plant to a particular space but to have green all winter and the fragrance all summer long is exquisite. 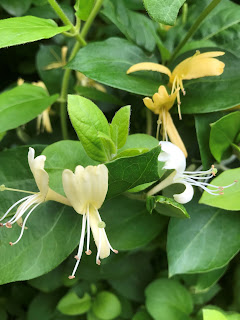 As I said it is a robust plant, a few years ago we had very strong winds and the honeysuckle, which was growing up a wall and over the arch of a gateway, came off the wall.

What to do? I chopped the whole structure down to about 60 cm from the ground. It grew quickly that summer and over the next few years I have kept cutting it down a bit each year gradually building up a strong base. It is now back to as it was, covering the wall and the arch over the gate. Hopefully it will not fall again.

My second honeysuckle was also an unknown variety, deciduous and found as a seedling growing in the garden. It must have grown from a seed, probably deposited by a bird, next door have the same one growing up the wall so that is probably the parent plant. It has taken several years to settle down but this year it has grown really well and looks wonderful. 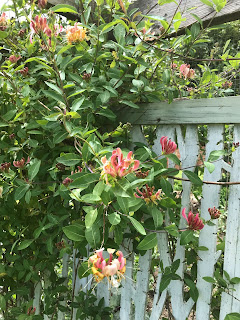 Finally a more unusual variety this is called Jazz, originally came from a garden magazine offer.
This is deciduous and has the most unusual flower formation. 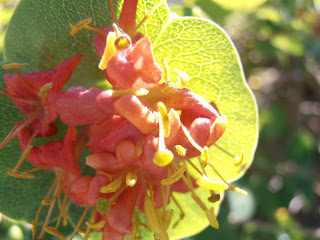 As the flowers die you get the seeds forming but as with the flower, it is encased in a cup like circular leaf. 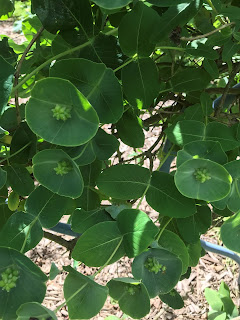 Honeysuckle, a useful plant to climb up a trellis, shed or wall. The first honeysuckle I had in this garden was an unknown evergreen variet...